Want to experience the feeling when 32 World Cup teams shoot at your goal in turns? To be a super goalkeeper to make all the teams in the World Cup deadly.

Super Goalkeeper – World Cup is a 3D World Cup-themed soccer goalkeeper game, where you can pick one from the 32 teams in the World Cup to start your journey. The most important feature of this game is brilliant realistic 3D images, impressive sense of the scene as well as a wealth of soccer props and gameplay. The basic operation of the game is just sliding your finger to control the goalkeeper gloves to save the penalties kicked you, and the soccer props with special features in the game will make you impossible to defend effectively.

The game has three modes, under each mode, the more balls held by you continuously, the higher score and the more gold coins you will get, so the secret to win the high score is to hold as many balls as possible in a row:
★World Cup Mode: You can select one of the 32 teams in the World Cup to participate in the competition, in order to ultimately win the World Cup.
★Arcade Mode: Players have three lives, if the ball is kicked into the goal, the player will lose a life, and gold coin will be awarded for saving the ball, in this mode, you can challenge your friends to find out who can save more balls and get the highest score.
★Time Limited Mode: Within the specified time, find out how many balls you can save, challenge your physical limits and reactions. 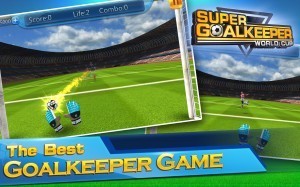 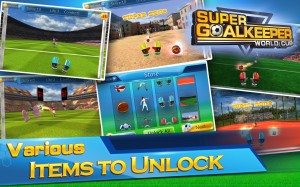 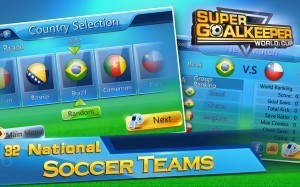